First challenge done, radio interview completed!  If you have 15 mins of your life you  feel like chucking away, you can listen to the audio clip below. Live radio certainly brings out the verbally incontinent side of me and I sound like a proper hooray henry! Apologies to Mr Soonawalla (my Liver Surgeon) for any suggestions he sliced me open like a melon and thanks to the nice people at Radio Cherwell, Jill from Oxford Radcliffe Hospitals fundraising team and any poor inpatients who didn’t try to electrocute themselves during the broadcast.

We have never been entirely certain in my family how my brother’s mind works, but it is a wonder to behold!  This is his latest thought and illustration.  Based on a quote from our dear wise Grandmother, Betty Reekie.

I used to think Monday’s were an awful waste of a seventh of the week and would have been much happier with 2 Thursdays. But I must say I am beginning to change my mind.

Origins at the White Lion, a delicious tapas bar in Great Missenden admittedly help sugar the pill.  I am often to be found there on Mondays with either local friend Jo or non local friend Alison and this Monday it was the turn of Alison, who had arrived full of creative ideas to help Bananagiraffes and galvanise me into action!

Chemo has made me ravenous so if I am not seated and eating by 12, I am in danger of eating my young. Luckily Origins have learnt to collaborate with this indecently early arrival and any shock they feel at being caught in their pyjamas is hurriedly hidden under a welcoming smile.

So the point of all this is to stop me procrastinating and publish a list so far of my challenges.

Sat 17 Dec – Piano Christmas songs challenge in Churchill Hospital cafe reception dressed as a banana with a giraffes head whilst the radio station record and broadcast it live.  As if the poor patients aren’t suffering enough already…

Feb sometime – Go Kartathon to raise money for beating bowel cancer.  We will be needing lots of teams to join in so more of this later when I can figure out the logistics

Sometime inbetween these dates, a short story challenge.  Andy Blackford has challenged me to write a short story with him starting us off and then pinging it to me and me pinging it back to him and repeating this process until he realises the futility of this. This is by no means a small challenge as this is the same Andy Blackford who writes for a living and can churn out 5000 words quicker than it takes my dog to fall asleep.  Whilst on the other hand, I haven’t written anything more gripping than Accountancy Software or Insurance brochures.  Neither of these required any plot of character development so it is fair to say I am out of my depth.

I was pondering why my body hadn’t managed to fight off the enemy invading forces and came to the conclusion that maybe my white blood cells after an early fight had decided to sign an armistice with the enemy army?

My nutritionist informed me that although I have a healthy number of white blood cells, the little chaps they call the NK or killer sqaud weren’t active enough. They had allowed the cancer cells to set up base in France (or my bowel) and if that wasn’t enough of a liberty, were allowed to go unchallenged into my liver (luckily for historical comparisons, not England!).

So, what’s the plan to turn this sleeping (apologies not suggesting for a minute the French were sleeping or any comparisons with bowel are intentional) NK squad into the feared Foreign Legion or probably more appropriately the current British army?

Plan A is the conventional opertations and chemo.  I am currently in phase 2 of this plan and so far all is going well. I am even getting my head around learning to ‘love’ the chemo rather than seeing it as the enemy as for mind/body reasons uknown to medical science this is not helpful.

Plan B is the back-up plan.  As my nutritionist said we have to eradicate the terrain that allowed these conditions to flourish in the first case. I will post my protocol for this at a later date as it is far too detailed to go into now.  But it involves taking that many tablets and drinks a day, I am getting gag reflex!

My Dad who has been the driving force in Plan B and has spent more hours in research than even Alexander Fleming, has bought a small pharmacy to my house and does spot audit checks to calculate if I am taking the right dose.

I should point out here for relevance that my Dad is a retired accountant, although we all know you can never retire that part of your brain.. Anyway, my Dad now has an even more audacious plan.  He has found a new product which is so well respected it costs more than a small flat in Great Missenden (post HS2) to buy.  It appears however you can buy this product at a fraction of the cost from a pharmacy in Budapest.

So, my Dad, who can do sums in his head so fast it would give my brain whiplash, is currently calculating if he can earn enough air miles to fly to Budapest, buy the product from the chemist (sounds like a ‘script’ from Dad’s army!) and be quids in!

I don’t know what else to say, other than my Dad is my super hero xx

p.s. this one’s too good to stay in the comments section.  Becca my comedic cousin has just knocked up this alarming picture.  I think it was during a nasty bout of gastroenteritis by the look of it.

Admittedly cancer does have its drawbacks, but it really is pretty spectacular.

I’ve always been a bit of a positive person (apparently it’s genetic according to the Guardian this week), but even I was beginning to see the worrying trend towards materialistic selfishness amongst my fellow ‘human beings’.   However, I would like to publicly state there is nothing like a bit of cancer to remind you of the goodness of your fellow man and women.

I’ve come into contact with almost exclusively good people since my diagnosis. Not goody goodies, but real decent, honest, warm, compassionate and helpful people.  And those nearest and dearest to me have become even closer.  So all round not a bad result! 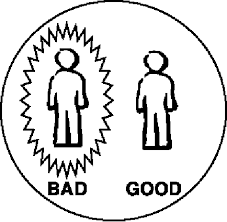 If I could have a pound for every time someone tells me to stay positive, I would be in Barbados right now.   If of course, I could get my colostomy bag past customs and excise!

Never have I needed more reminding of this simple but true saying.  And boy how you have risen to fill that gap people!

Hospital this morning as side effects getting worse (night sweats, achey bones and skin, tingling fingers, sickness and diarrhea and total wipeout exhaustion that doesnt let you sleep) to be told to lay of the chemo sweeties for a couple of days in the hope my body will adjust and be able to tolerate them better on re-entry.  In the meantime rest and go to the mind gym to get the chemo depression under control!

Anyway, my friend Alison (she of the original blog idea) has decided I need to keep my focus and contacted Radio Cherwell to arrange a radio interview for 28th November as a precursor to the playing christmas songs dressed as a giraffe challenge in the Churchill Hospital.  So no getting out of this one now!

Meanwhile, I am adjusting my expectations and learning to grab the half an hour in the day when I feel capable and hope that it encourages other half and hours to come and join it in due course.  If anyone has any suggestions on how to train an errant mind, no reasonable offers refused!

I don’t know much these days, but I do know that if love and kindness can get you well then I am already cured.  At a lovely family dinner on Sunday to tempt me out of my sinking mood, my amazing brother and his girlfriend gave me these beautiful original artworks.  They had handpicked them to lift my spirits and David then illustrated them.  I have uploaded them in the hope they give everyone else the encouragement and strength they will continue to give me over the months.

For those of us over age 12 who can’t read small type they say in order:

Smooth seas do not make skilful sailors.  African Proverb
A Hero is an ordinary individual who finds the strength to persevere and endure in spite of overwhelming obstacles. Christopher Reeve
Strength does not come from physical capacity, it comes from an indomitable will. Gandhi
I ask not for a lighter buden, but for broader shoulders.  Jewish Proverb
The greatest glory in living lies not in never failing, but in rising every time we fail. Mandela
A joyful heart is good medicine. Proverbs 17:22
Women are like teabags. We don’t know our strength until we are in hot water. Eleanor Roosevelt

My story; from the top; to my bottom; and up again.