I’m home now! This last week hasn’t been quite the rest cure I had hoped but it’s been worth it to get a new bum for my birthday.

After checking in last Tuesday we were confronted with the usual test of nerve interview with my surgeon.

“Do you realise this is major surgery? I will attempt to do blah blah, but you must be aware of the risks of a leak which can happen when the bowel is rejoined.  If this happens, you will suddenly feel very unwell about 3 or 4 days in and be rushed back into theatre, end up in intensive care with septicaemia and of course another bag.  Do you want to pass go?”

“But, the risks are very small” I said motioning unsuccessfully with my eyes to my children who were in the hospital room waiting to see me off, Joseph by now shaking his head and sternly mouthing “No, Mum” to me.

Well I’ll be a monkey’s uncle, that’s ok then, what are we waiting for.  Apparently a small delay for Mr H to get his saws from the back of the car, peel both children off me; a historic moment as both were cuddling me so hard they had momentarily forgotten to argue over who had access to the most legs or arms, and we were off!  Yet another reminder (if any was needed) as to how much tougher this has been on my family.

Whilst prepping me for theatre I happened to notice the trays of medical equipment and was particularly taken with Guedel Airways, less so with Nasal Airways.  “Where are we off to then?”  I said to my Chinese anaesthetist.  “Where would you like to go?” he asked.  “Mauritius?” I said hopefully.  “Sounds good, I was born there, let’s go” he says whilst administering a delicious cocktail.

I came around some 4 hours later was wheeled back to my room and began babbling incoherently about Eric Bristow, the A405 and the Satsuma man. That’s morphine for you!

16 pumps of morphine later I was chucking up like a kennel full of sick dogs.  So my precious pump had to be withdrawn and I was forced to choose between pain control and sickness control.  I opted for sickness control, somewhat unsuccessfully. After sampling every drug in the hospital and even one couriered in from another local hospital, my veins were collapsing faster the price of Christmas puddings.

Eventually on day 6, I was able to slowly introduce light food and get accustomed to the utter boredom of hospitals.  By the weekend, there were only 2 of us in the entire hospital and the other women never left her room.

The good news is Mr H is a miracle worker and put me back together again, mostly by keyhole (main exit point was more of a letterbox). My bowel eventually started working again (TMI!) after 5 days and what do you think I got/lost for my 6 days of not eating? Half a stone. Thank you very much indeed.

If anyone else is going through a reversal here’s some things you might want to know;

But to end on an uplifting note, my dear friend Andy Blackford reminded me this morning of kintsukuroi meaning to repair with gold; the art of repairing pottery with gold or silver lacquer and understanding that the piece is more beautiful for having been broken.  My own repair was made with titanium staples so maybe not quite so beautiful, but nonetheless it’s thought provoking.  I love my new bum! 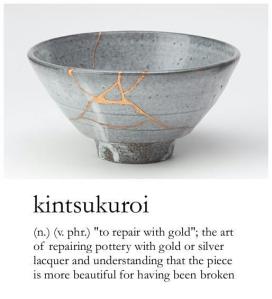 4 thoughts on “Just been tying up loose ends”